Throughout the 2016 “selection” process, there have been many leaked emails, documents and recordings released, primarily through WikiLeaks, which reveal a lot of very damning and incriminating evidence for both candidates. However, it should be clear to anyone open-minded enough to see past the party-specific propaganda, that Hillary Clinton has gotten the majority of the negative attention. Try as the Democratic party might to cast Donald’s gaffs at center stage of this year’s scandals, it is clear to most that even what Clinton is being accused of is far beyond any demagogic rhetoric or lewd comments, let alone what has gone far past accusations and landed squarely in the realm of fact.

It should be no secret to most that the mainstream media in this country is absolutely dead. Not only has each been bought up by corporate interests that dictate what they say and write, each station is now all but open about the fact that they have a political stance. Now for many of the younger Americans out there, you may be saying, “well yeah everyone knows that,” but what you might not remember is that at one point, not too long ago, the news was an impartial representation of what was happening in the world, with interpretation, yet devoid of opinion, or rather they still successfully pretended to be without bias. 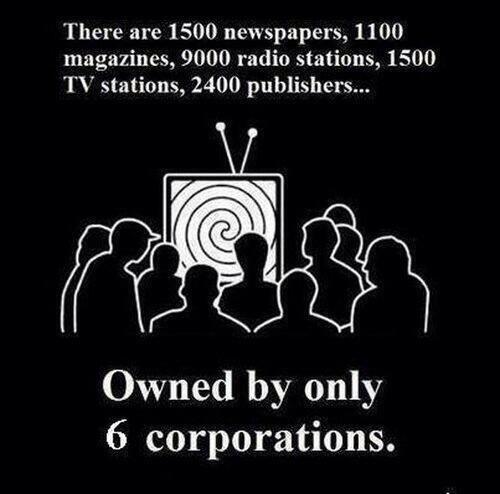 Yet today, it is quite apparent which station supports which candidate, and they make no effort to hide that fact. It was only until very recently that stations still pretended that they had an impartial stance on anything that was reported, even in the face of obvious admissions; but that all changed as people became less concerned with the legitimacy of what they were being told, and more concerned about whether the station they watched fell in line with their preconceived and programmed beliefs, effectively completing the circle of reinforcement. Viewers today simply seek out the station that reinforces their beliefs, and tell themselves they did their due diligence.

With this in mind, The Last American Vagabond reviewed the recently leaked emails by WikiLeaks and compiled a list of each journalist that has been outed as a Clinton stooge, so that the American people can have a clearer picture of the depths to which this country’s media has fallen. It should also be noted that this is not just limited to Clinton, as Trump no doubt has many journalists in his pocket as well. Trump wishes to be seen as this “anti-establishment” candidate, but that could not be further from the truth; Trump is the literal embodiment of the establishment and could not be further removed from the average American. However, as Julian Assange has made it his mission to highlight the absolute criminal activity of the Clinton’s, this compilation will focus on those journalists clearly in the pocket of the Clinton campaign: 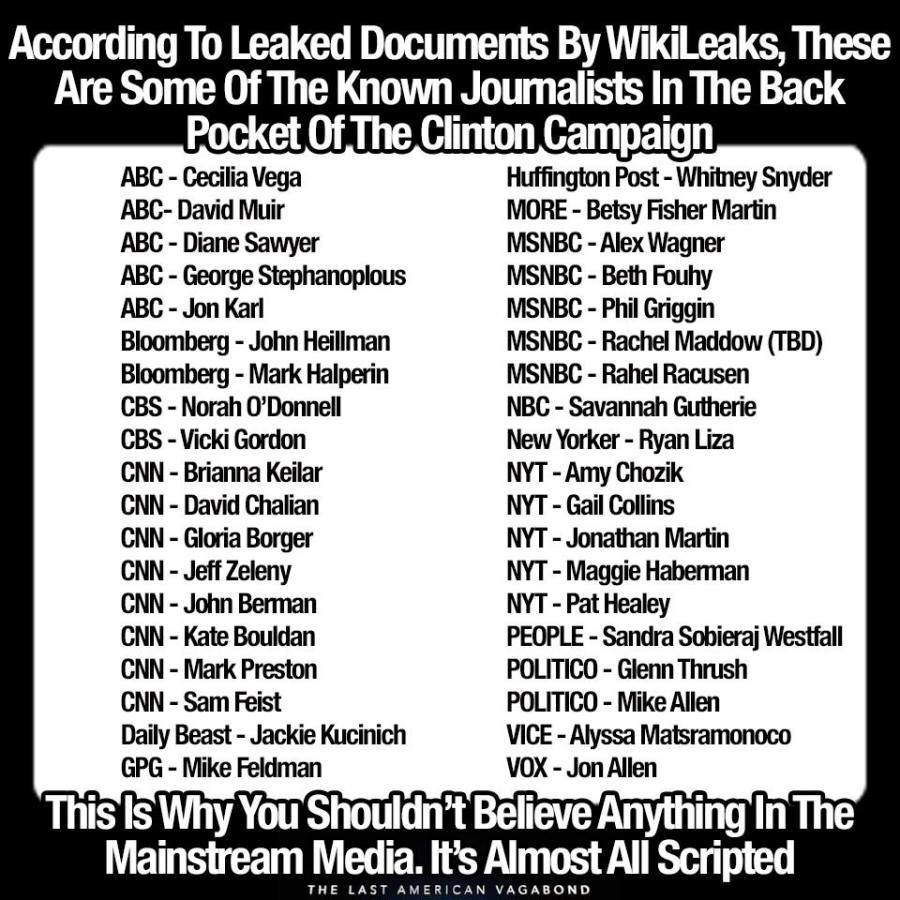 To be clear, we at The Last American Vagabond have been outspoken about our stance; and that is#VoteNobody2016. This organization in no way endorses the currently broken and corrupted political system, and will not perpetuate or legitimize that system by participating in it. That being said, one must be able to criticize one candidate without being labeled a supporter of the other, and in this wildly polarized version of America that we find ourselves in today, that is exactly what the people are confronted with: black or white, you must choose(pun intended). Not to imply that this is solely a racial issue, although that is a factor, but rather that there is no longer a middle ground, in politics or anything else for that matter, and this is by design.

The desired end-result is to have those so fully indoctrinated that they are willing to fight and die for the intended side or ideology; and have them be so outspoken about the dangers of taking any other path, that those on the fence will quietly take the path of least resistance and conform, regardless of what their true beliefs are. This is called self-censorship, and it is a huge issue keeping many from seeing the current shift, which is enveloping the minds of people in this country, for what it truly is: a paradigm shift. Then those who will not conform are cast as the enemy, simply for having a difference of opinion and the divide is complete. Resulting in the people becoming resigned to simply pick from the two state-approved choices, lest they be cast as “outsiders,” while being told this pitiful display is “democracy in action.”

This polarized stage on which the current circus is being played out, is beginning to fall apart as more Americans begin to question its integrity. Regardless of one’s political leanings, this list should be seen for what it truly is: A clear example of the deterioration of everything the people of this country once stood for; the complete breakdown of any remaining journalistic integrity mainstream media retained; and the absolute realization that American politicians no longer concern themselves with what is best for the American people.

Ask yourself one question: How much of what you took from these sources over the years as fact, was actually paid disinformation designed to manipulate and control your opinions, distributed at the behest of the Clinton campaign?

TLB recommends other articles from The Last American Vagabond

RYAN CRISTIAN  “Living is easy with eyes closed, misunderstanding all you see.” – John Lennon Driven by a desire for accuracy, chef and alternative news stalwart Ryan Cristián has a passion for the Truth. As founder and Editor-in-chief of The Last American Vagabond, he understands that Americans want their news to be transparent, devoid of the opulence frothed out by today’s Corporate Media. A cultured and insightful man with a worldly sense, Ryan’s unjaded approach offers common sense to the individual racked by the ambiguous news cycle – a vicious and manipulative merry-go-round that keeps trenchant minds at a manageable distance from the truth. Avid writer and editor by day, Truth seeker by night, Ryan’s reality defines what it means to be current.