Dems angle to oust him on health grounds

(RT-USA News) Donald Trump has been given a clean bill of health by his doctor, who said the president has completed a course of treatment for his Covid-19 infection and will be ready to return to “public engagements” on Saturday.

“Since returning home, his physical exam has remained stable and devoid of any indications to suggest progression of illness,” Dr Sean Conley said on Thursday evening in a White House memo. “Overall, he’s responded extremely well to treatment, without evidence on examination of adverse therapeutic effects.”

Saturday will mark the 10th day since Trump tested positive for the virus. Based on “the trajectory of advanced diagnostics” that his team of doctors has been conducting, “I fully anticipate the president’s safe return to public engagements at that time.”

The positive health report came on the same day that Democrats revealed plans to create a congressional commission to help determine whether the president is too sick to “discharge the powers and duties of office.” House Speaker Nancy Pelosi said, “We’re going to be talking about the 25th Amendment” in a press conference Friday.

Bill to be introduced by @SpeakerPelosi and @RepRaskin to create a commission to review health and fitness of @POTUS for office. pic.twitter.com/oSUOhn2rBT

The 25th Amendment lays down guidelines for replacing a president who dies, resigns or is incapacitated. One provision of the amendment allows the vice president and a body approved by Congress to jointly determine whether the president is unwell enough to be replaced. 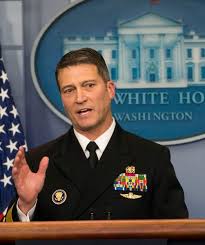 Trump tested positive for the virus last Thursday and was moved to Walter Reed National Military Hospital on Friday, after suffering from a high fever and diminished oxygen levels in his blood. According to Conley (pictured left) and his other doctors, Trump’s condition improved rapidly and he suffered no more bouts of high fever after [last] Friday morning. He left Walter Reed on Monday evening, returning to the White House, and later said, “I feel perfect. There’s nothing wrong.”

The positive doctor’s report also could help ease concerns over Trump’s health heading into the presidential debate that was scheduled for October 15, but the Commission on Presidential Debates has already decided to make that event virtual, not in-person. Trump said on Thursday that he wouldn’t participate in an online debate with Democrat challenger Joe Biden.

The Changing Of The Guard II