A UK daily newspaper, The Daily Telegraph, published an article today with UK health chiefs effectively calling for Facebook to censor anyone that challenges the mainstream view on vaccines. It focused on the MMR vaccine and measles. 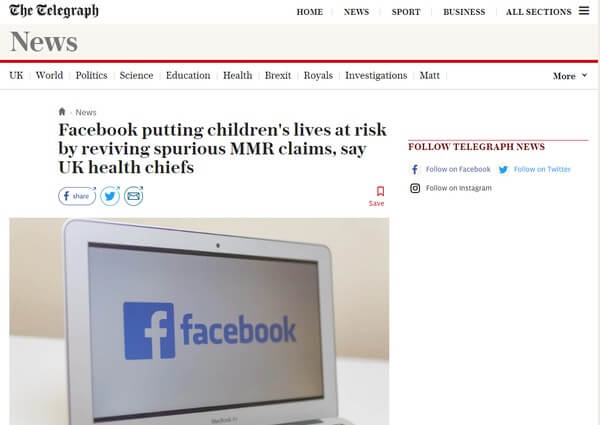 The article blames anti vaccination sites for promoting fake science that “caused a surge in measles cases” and also spreading conspiracy theories. And notes that those sites appear at the top of Facebook searches around those topics.

Unlike Google, which filters out anti-vaccination sites to promote guidance from the NHS, government or World Health Organisation, Facebook’s searches appear to be based solely on their most popular and active sites irrespective of whether they are peddling false information. The biggest anti-vaccination sites have more than 100,000 followers.

The article quotes Professor Helen Stokes-Lampard, Chair of the Royal College of GPs, who is deeply concerned that Facebook was allowing “false and frankly dangerous ideas” about MMR and other vaccines to be spread over the internet. 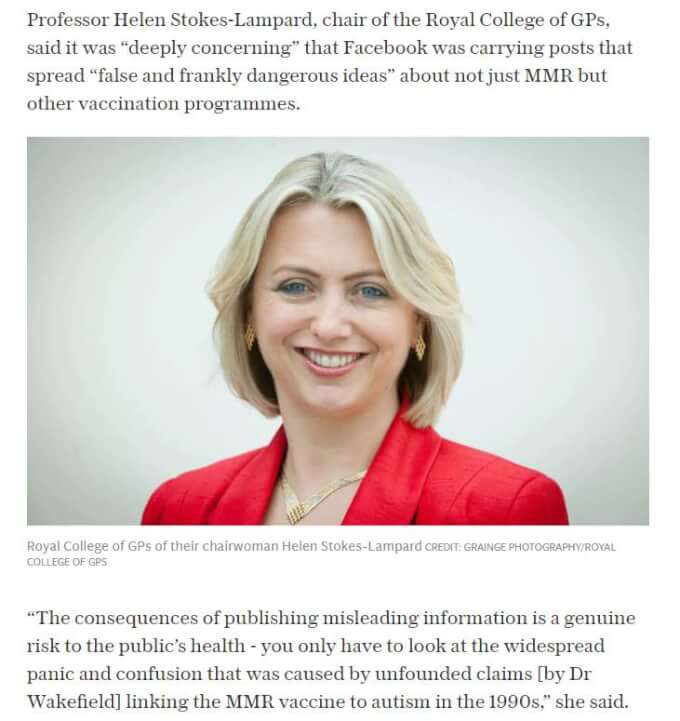 “The consequences of publishing misleading information is a genuine risk to the public’s health – you only have to look at the widespread panic and confusion that was caused by unfounded claims [by Dr Wakefield] linking the MMR vaccine to autism in the 1990s,” she said.

Just in case we forgot, the author has attributed (inserted) Dr Wakefield as the cause of that widespread confusion and panic. For a more thorough explanation of Dr Wakefield and the MMR “controversy” not reported in the main stream press, see The Global Vaccine Crisis of 2018: Why Andrew Wakefield is Back in the News and Best of AoA: The Sarah Boseley Problem Again.

The article then mixes quotes from the good professor with unquoted text informing us that a “sizeable cohort of twenty-somethings” were not protected from potentially life threatening diseases, with 600 cases of measles in the UK this year alone. And that “we were on the brink of eradicating [measles]…[And measles] can have life-changing consequences”.

It also notes that anti-vaccine movements are fuelling a potential quadrupling of measles cases this year.

What can be done?

Shirley Cramer, chief executive of the Royal Society for Public Health, demanded urgent action by Facebook, saying its own research, due later this year, showed parents were more likely to see negative and often-inaccurate messages about vaccinations on social media than positive ones.

Unfortunately, it doesn’t end there: it also mentions Robert F Kennedy, the “anti-vaccination lawyer”; the cliff notes version of Dr Wakefield being struck off; the various anti-vaccine sites, including Truth About Vaccines carrying “an alarmist report about a mother whose baby was injected with the MMR vaccine and died a minute later”. But the article quickly reassures us that “[t]here is no evidence the vaccine was to blame”, and it’s merely poor handling and a refrigeration error that are suspected as causal.

It finishes with a “health specialist”, Dr David Grimes of Oxford University, stating:

If something is so obviously fake and people are undermining and causing damage to public health, they should not be allowed to do that.

Dr Grimes is a physicist not a physician and does not appear to have any involvement with infectious disease. Yes. Hmm … [long pause for that to sink in]. OK, moving on.

In past articles we have covered measles fake news and fake data; all the way from local newspapers quoting Public Health England to international health organisations. 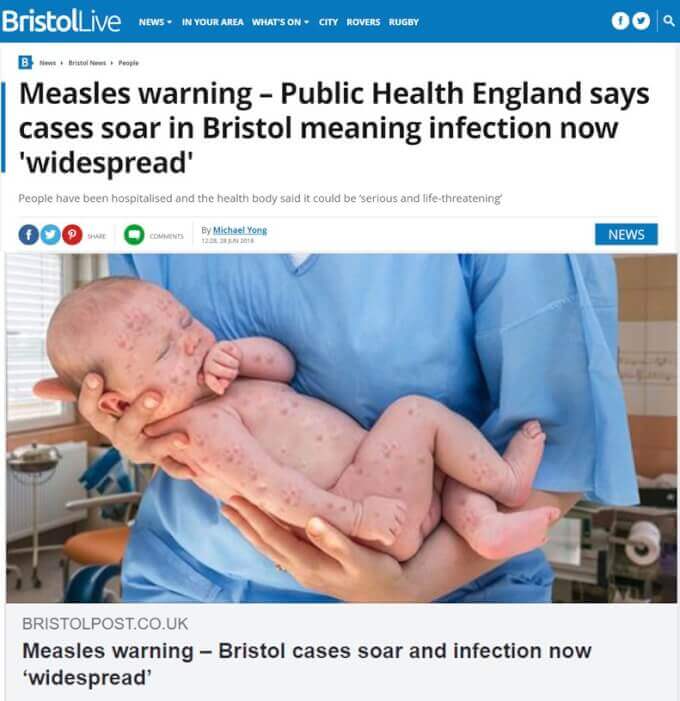 The comment below the picture also implicates Dr Wakefield in relation to the “outbreak”.

Here’s the original, undoctored photo of the baby, as seen on a Nursing website. 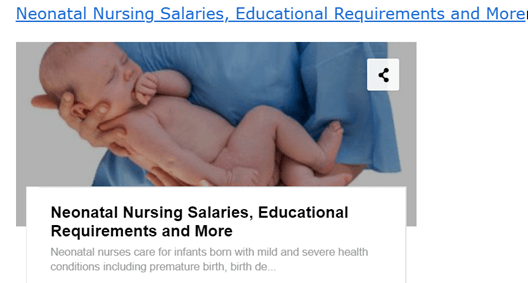 We also looked at the actual UK data regarding measles cases: 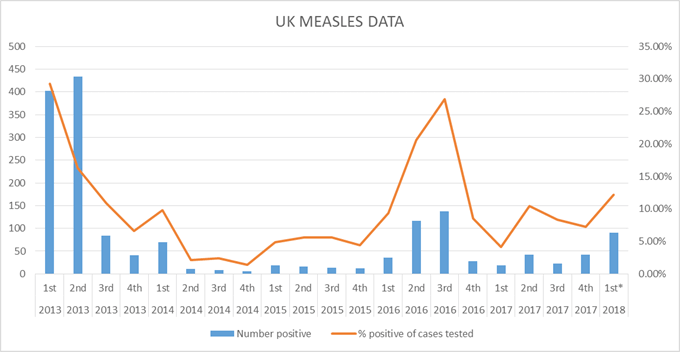 And, as I stated then: the graph clearly shows that the number of confirmed measles cases rises and falls, and that is consistent with epidemiology: measles cycles. It is an endemic infection in large populations and cannot be eradicated; goodness knows we have tried! It basically goes up and down, and when it goes up, we hear the same cries and dire warnings as demonstrated in the Bristol Post.

The number of confirmed cases this year is significantly less than prior rises. Also of note, the percentage of suspected cases that actually were measles has also fallen compared to other “outbreaks”. That indicates an overdiagnosing of measles when in actual fact it wasn’t measles at all.

Measles is cycling in a predictable pattern but the large number of reported cases reflects misdiagnosis, and the actual number of confirmed measles cases is less than we have seen with prior cycles.

We also covered data demonstrating a similar tactic with the EU, as featured in an openDemocracy article that warned of EU citizens’ hesitancy around vaccination and a measles outbreak. The message could be interpreted: unvaccinated children are the cause of outbreaks and if we all got vaccinated, the outbreaks would stop. I highlighted some data the author of that piece hadn’t told you about, easily understood in just two graphs. 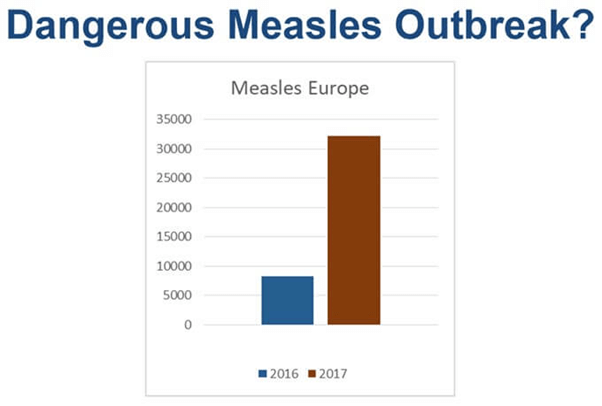 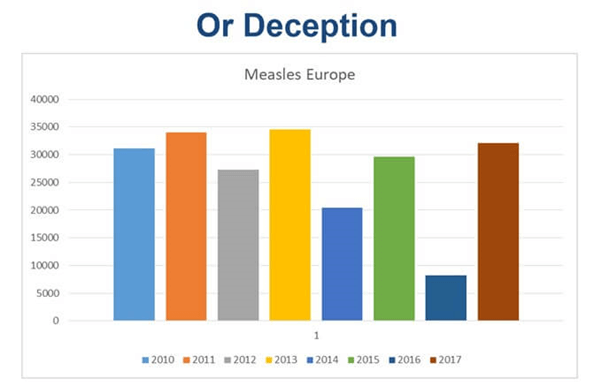 Another excellent article, Don’t Believe Everything You Read About Flu Deaths, from the Huffington Post, where the author provided evidence of similar tactics in the US around the flu vaccine:

The CDC unabashedly decided to create a mass market for the flu vaccine by enlisting the media into [falsely] panicking the public. An obedient and unquestioning media obliged by hyping the numbers, and 10 years later it is obliging still.

Articles like those, including the Daily Telegraph’s, are collectively known as Astroturfing.

-a strategy employed to promote a false sense of consensus around an idea. Astroturfing is used by drug companies to promote the use of their products.

Watch this excellent presentation from Sharyl Attkisson about Astroturfing if you haven’t heard of it before.

I’ll also remind you that in order to understand fully this problem of fake news and propaganda around outbreaks and vaccines, you have to understand the deeper problem of pharmaceutical propaganda in the science journals and news media masquerading as science. For the sake of this discussion, vaccines should be seen as drugs. Drug— a substance used in the diagnosis, treatment, or prevention of a disease or as a component of a medication.

Ben Swann in Understanding Big Pharma’s Propaganda Machine “discusses how companies within the pharmaceutical industry are able to attract positive media surrounding its drugs, regardless of whether or not their claims are founded”.

[She] spent a decade identifying drugs that would have the potential to treat prevalent and widespread medical issues, and persuading physicians to believe that these drugs were valuable, even if their effectiveness or overall safety was not yet proven.

According to Powell, ad agencies work with pharmaceutical companies to create ghostwritten articles that praise certain drugs utilizing cherry-picked data, and these articles are provided to medical journals. These “scientific articles” are not truly scientific, says Powell, but are actually forms of advertisements created to convince physicians to believe in a certain drug’s potential as well as influence their colleagues.

“It would start with New England Journal of Medicine, JAMA, those kinds of large publications,” says Powell, as well as communicating with smaller publications more specifically tailored to certain medical conditions. “We’d plan out over the next few years how we’re going to take the messages that come from the data— which we’d slice and dice that up— and disseminate those messages throughout those publications over a course of years.”

That fraud, otherwise known as Astroturfing can involve not just the scientific journals, medical publications and public health authorities, as they disseminate false or misleading information, but also the media.

And, as if that wasn’t enough to concern us, we also covered the same tactics in our international organisations:

The same applies to monitoring progress in major disease interventions. For example, the assessment of a recent change in measles mortality from vaccination is mostly based on statistics predicted from a set of covariates such as the number of live births, vaccine coverage, vaccine effectiveness and case fatality ratios.4 It is understandable that estimating causes of death over time is a difficult task. However, that is no reason for us to avoid measuring it when we can also measure the quantity of interest directly;5 otherwise the global health community would continue to monitor progress on a spreadsheet with limited empirical basis. This is simply not acceptable. [My emphasis].

In simple terms: Dr Shiuya was stating that any claims about those vaccination programs were derived from statistically manipulated guesswork, not accurately measured data. And no matter how long they sat at their computers and crunched their theoretical numbers of “vaccine effectiveness” and “case fatality ratios” on their excel spreadsheets, they were closer to theoretical fiction than factual reality.

This is how they represented the measles data: 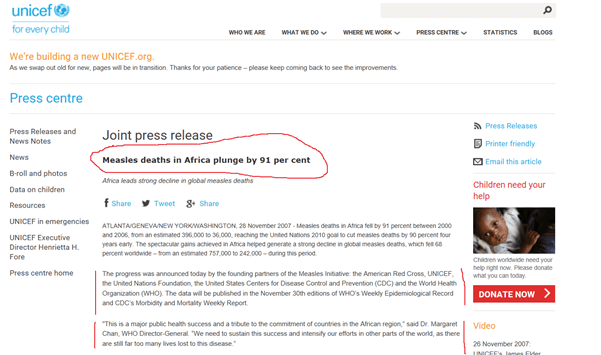 SOURCE: UNICEF Measles deaths in Africa plunge by 91 per cent

“This is a major public health success and a tribute to the commitment of countries in the African region,” said Dr. Margaret Chan, WHO Director-General. “We need to sustain this success and intensify our efforts in other parts of the world, as there are still far too many lives lost to this disease.”

Not to let science get in the way of their “vaccine science”, they effectively made the figures up.

It truly boggles the mind how they have been getting away with this for so long!

But anyway, why don’t we close this article with the same quote used to close the Daily Telegraph’s article:

“If something is so obviously fake and people are undermining and causing damage to public health, they should not be allowed to do that”.

Click on the links or images below to read more great articles by Dr. Mike Williams:

Measles Outbreaks Or a Philosophy Of Deception? – By Dr. Mike Williams

Measles and The “Noble Lie” – By Dr. Mike Williams

No TIME to Die – By Dr. Mike Williams