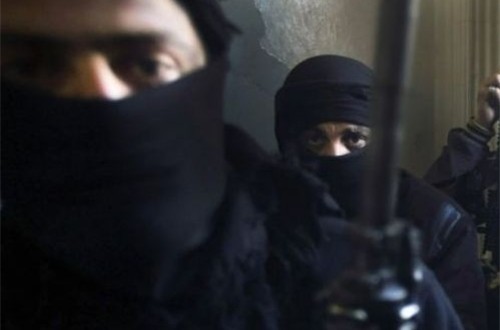 US President Barack Obama hosted a top-level war council this past week in Washington with the military leaders from 21 countries in attendance – under the official remit of coordinating tactics to defeat the Islamic State extremist group in Syria and Iraq.

The titular American commander-in-chief spoke with the gravitas of a decorated soldier. «This is going to be a long-term campaign and like all military campaigns there will be ups and downs», said Obama to the assembled military chiefs at Andrews Air Force Base, near Washington DC.

Obama’s presumed military authority was something of an achievement, considering that he is, by profession, a community activist, a professor of constitutional lawyer, and a former senator. The 53-year-old politician has never served a single day of his life in the US military, let alone seen combat action or having been awarded medals for bravery.

But that’s not the only anomaly that sprung to mind about Obama’s war council in Washington. Together with the usual Western allies of Britain, France, Canada and Australia, there were military top brass from Turkey, Saudi Arabia, the United Arab Emirates and Qatar.

Yet, all these Middle Eastern «partners» are documented as having deep logistical links with the Islamic State and other related jihadist terror groups marauding in Syria and Iraq.

Joe Biden, the US vice president, admitted this terror connection between Turkey, Saudi Arabia and the other Arab oil monarchies in a public debate at Harvard University earlier this month. Although Biden was later forced into making cringing apologies to the said offender countries, his initial blundering confirms the paradox that the US-led anti-terror coalition is comprised of, well, state-sponsoring terrorists.

The terror sponsors include the US and Britain, who together spawned the Al Qaeda-linked network in their laboratory of illegal occupation of Iraq from 2003 onwards. Al Qaeda in Iraq (AQI) later mutated into Islamic State (IS, ISIL or ISIS) during the West’s covert war for regime change in Syria, which has been raging since March 2011, with a death toll of nearly 200,000, more than six million people displaced, and half of Syria’s 23 million total population living in dire humanitarian conditions, according to the United Nations.

The open secret of weapons supplies to extremists from the US, coordinated by its Central Intelligence Agency and routed through Turkey, Saudi Arabia, Qatar and Jordan, is not even a matter of controversy in the Western media. It has already been reported with mundane indifference by mainstream Western media outlets, such as the New York Times and the Daily Telegraph.

A further striking anomaly from Obama’s war council in Washington – scarcely reported in the Western media, not surprisingly – was the complete absence of military representatives from the much-heralded «moderate Syrian rebels».

Bear in mind that Obama’s strategy for allegedly eradicating the IS extremists is based on two fronts. The first is the coordinated aerial bombardment of militants, involving warplanes from the US, Britain, France, Australia and all of the above Arab states; the second is the purported training of «moderate» Syrian rebels, who will take the fight to the Jihadists on the ground. With the anticipated defeat of IS and related extremist Islamist groups, such as Jabhat al Nusra and Ansar al Sham, the Western-backed «moderate» rebels will then be empowered to pursue their noble rebellion against the «despotic» Syrian regime of Bashar al Assad – or at least so goes the theory.

President Obama has already won the backing of the US Congress to train vetted, moderate Syrian rebels with a budget of $500 million – in a revamp of the Free Syrian Army. The American military training is to take place in undisclosed camps located in Saudi Arabia, as well as now Turkey belatedly offering its territory for that same purpose following top-level negotiations in Ankara last week with US former marines General John Allen.

Hold on a minute. Congress has approved $500 million to train a new cohort of the supposedly moderate and secular Free Syrian Army; and Saudi Arabia and Turkey are providing bases for that undertaking. But at Obama’s seminal war council on «coordinating» plans there was not one representative from the much-vaunted moderate rebels who are assigned this crucial military role.

A US official attempted to explain the absence of Syrian rebels at the Washington summit by saying that such a participation was «not ready at this stage, and there is still a lot of training to do».

In other words, the so-called moderate rebels that the US is touting do not actually exist. It’s therefore less a case of Free Syrian Army and more a case of Fictitious Syrian Army.

This conceptual void has long been pointed out by many observers of the Syrian conflict. The notion of a moderate Free Syrian Army fighting a virtuous fight against a tyrannical regime is but a figment of Western government and media imagination, aimed at giving the Western powers a political and moral cover to indulge in its criminal regime change machinations against Syria.

Many of the supposed FSA brigades are in fact integrated with the extremist networks of IS, al Nusra and Ansar al Sham. Not only fighters, but also weapons and funding are recycled in a revolving-door relationship between these groups. Yes, there have been feuds, but this infighting is borne out of turf wars over criminal booty, not anything to do with ideological ethics.

However, Western governments and their dutiful media cannot admit this reality because that would leave them open to public vilification. Hence, they have projected the illusion, with Western media assistance, that there is a «moderate» legitimate Syrian opposition, whom the West supports and whom the West is concerned to elevate over «rogue» terror groups.

This fiction was apparent from the resounding absence of any such nominated moderate group at the Washington anti-IS summit.

It was also confirmed in a subsequent report from the McClatchy Washington Bureau, published Wednesday, the day after Obama’s war council. Under the headline ‘It’s official: US will build new Syrian rebel force to battle Islamic State’ the newspaper reported that «the United States is ditching the old Free Syrian Army and building its own local ground force to use primarily in the fight against the Islamist extremists».

Forget about the misnomer of the «old Free Syrian Army». There was never one to begin with. The point to take away is that the US is in effect admitting that there isn’t a force worth talking about.

McClatchy quotes General John Allen, the US envoy to the anti-IS coalition, as saying: «At this point, there is not formal coordination with the FSA».

It’s worth clipping the following editorial paragraphs from the same

«For most of the three years of the Syrian conflict, the US ground game hinged on rebel militias that are loosely affiliated under the banner of the Free Syrian Army, or FSA.

«Their problems were no secret: a lack of cohesion, uneven fighting skills and frequent battlefield coordination with the al Qaida [sic] loyalists of the Nusra Front.

«This time, Allen said, the United States and its allies will work to strengthen the political opposition and make sure it’s tied to «a credible field force» that will have undergone an intense vetting process.

«It’s not going to happen immediately», Allen said. «We’re working to establish the training sites now, and we’ll ultimately go through a vetting process and beginning to bring the trainers and the fighters in to begin to build that force out».

This is a stunning admission, hardly picked up in the Western media. Washington is confirming that there is no such thing as a moderate rebel force in Syria. But what Washington and its fellow state terrorist sponsors are doing is throwing $500 million into a project of creating the semblance of «a credible field force». This creation will then give Western powers and its Arab allies a legitimacy to escalate their criminal covert war for regime change in Syria.

Looking To 2019 At The Ron Paul Liberty Report [Video]