Dr. Fauci: a conversation in Hell

Anthony Fauci steps off a small boat floating in a river at the bottom of a great cavern.

A lamp cuts into the darkness and illuminates a small table and two chairs. Fauci walks to the table and sits down.

He is joined by his old mentor, whose name is unknown.

It’s been a long time, Anthony. Remember me?

Of course. But why am I here?

I was in medical school then.

That’s when we promised you significant rewards if you performed well for us. That day, I told you: you need to lie with CONSISTENCY.

No you haven’t. You’ve cooked a goose and a cake in the same pan. You’ve said it was raining and not raining. You’ve worn only a jock strap and spread sunscreen on your body in the Arctic, and you’ve bundled up at the Equator. You’re a mess.

I didn’t mean to be a mess.

I’m not interested in excuses. I’m going to straighten you out. I want you to pay close attention. Otherwise, you go in the Lake of Fire.

You said masks were useless. Later you said people should wear two. You admitted the vaccine was experimental, implying the people were guinea pigs. Then you said the vaccine was absolutely safe and effective. You said asymptomatic people never drive an epidemic by transmitting a virus. Then you said millions of asymptomatic people who merely tested positive were a major source of transmission. You said running the PCR at 35 cycles or higher yielded meaningless results. But labs all over the world are running the test at 40 cycles. You’ve turned into a buffoon. A clown.

I’ve made a few mistakes. I’ll correct them.

It’s too late. The cat is out of the bag.

Then what can I do?

Ignore your past contradictions. As if they never happened. You’re a matinee idol to millions of soccer moms. They’re bubble brains. They can’t think their way out of a wet paper bag. Climb back on the straight and narrow. Claim the test is very accurate, the case and death numbers are alarming, more lockdowns will be necessary, new mutations of the virus are here, and people must take vaccine. And THAT’S ALL. Don’t try to EXPLAIN things. That’s when you screw the pooch. You’re not a medical genius, Anthony. You’re our agent. Just do your job.

But I love explaining things.

And that’s your flaw. I wish we had spotted it sooner. We would have used someone else. Redfield or even Birx.

I have theatrical qualities.

Yes, you do. For low-budget Hollywood B movies. Cary Grant you’re not.

But Bill told me— 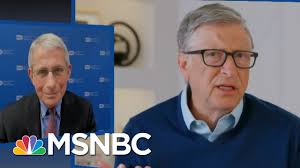 Forget about Bill Gates. I’ll be talking to him soon. He thinks he has to throw money at every influencer in the world. His ego is out of control. He’s a nasty little poisoned pastry. Anthony, listen to me. You’re a low level gangster on a cop show. In the first ten minutes, detectives drag you into the station and question you. They find out you were in the hospital having gall bladder surgery on the afternoon of the murder, and they let you go. Got it? You’re not doing Inherit the Wind or Hamlet.

OK, all right. But I’m disappointed.

Now let me remind you of the truth, so you can make a clear distinction between it and what you’re doing. Perhaps that’ll give you much needed clarity. Viruses are basically fictions. Nobody isolates them. When technicians perform genetic sequencing, they’re cobbling together strips of DATA and using computer programs to smooth out the wrinkles and the gaps. Fairy tales. There is no pandemic. The people who are dying are dying from traditional lung infections and pollution and toxic vaccine campaigns and pesticides and medical drugs, and all this is relabeled COVID. The virologists in their labs are clueless. They’re true believers. Little egos depositing paychecks and publishing papers and angling for promotions. UNDERSTAND?

Yes. But listen, a friend of mine is developing a screen play about the life of Albert Schweitzer. His clinic in Africa. Saving lives. Great humanitarian. The Disney studio and I have been in talks. Don’t you think I could play Schweitzer?

AGAIN, Anthony—you’re a small-timer on cop shows. You’re running a protection racket forcing shop owners to come up with cash every week or else. That’s your level, Anthony.

I’ll stick to the COVID script. But at very least, I’d like to win the Nobel for Medicine.

Promotions are based on performance.

Are you the Devil?

Does the Devil ever watch me work?

With due respect, sir—I feel like the victim of blackmail.

Try to imagine how little concern I have about your feelings. And blackmail occurs when the participant is unwilling. You signed up for this job. You were eager.

And there we have it. Vanity. Of all the sins, it has the most tangles and traps. One tries to escape its consequences by asserting greater vanity.

No, you wouldn’t. But unless you somehow come to your senses, and soon, you’ll pay the price.

I object to this whole conversation.

Little man, you have no standing to object in our court. As presently configured, you’re an asset, a disposable piece of property.

I wasn’t aware I was involved in a legal proceeding.

In my domain, EVERYTHING is a legal proceeding. That’s why they call it Hell. 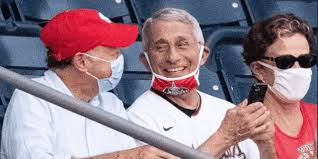 Can you feel the heat? You’re coming closer to the Burning Lake.
Go back to your life. You have one more chance. And if you ever show up at a baseball game again without a mask, we’ll give you a stroke.

Joe Biden had two brain aneurysms in 1988. You see how he turned out. Do you want to be a Biden?

Then mend your ways, Anthony.

I think I need to see a psychiatrist.

My secretary will be in touch. We have a list of solid professionals.

I’m going up and down. Maybe I am bipolar.

Anthony, lean closer. Actually, just between you and me, there are no defining lab tests for any so-called mental disorder. You’re just a moral coward. Why do you think we chose you?

Sure. Let’s call it that. Rather than self-delusion.

Have you taken a good close look at the specimen she’s married to?

Why am I such a big shot in my life and such a disappointment to you here? I’m not used to being treated this way. I’m the head of the National Institute of Allergy and Infectious Diseases and the chief medical advisor to the President. I’ve advised every President since Ronald Reagan. The New Yorker and The New York Times have described me as one of the most trusted medical figures in the United States. I’ve developed therapies for polyarteritis nodosa, granulomatosis with polyangiitis, and lymphomatoid granulomatosis.

Anthony, people look at your reputation. I look at YOU.

Really? That’s what you’re going with? Fair? Think of us as a production studio, Anthony. We took you on. Granted, we gave you a significant role. But when an actor can’t keep his lines straight, when he wanders off-script, when he endangers the whole project, we enact harsh penalties.

This interview is over, Anthony. I’ll write my report and forward it to my supervisor. A piece of advice: when you go to sleep at night, make sure you’re wearing asbestos pajamas.

Frankly, my dear, I don’t give a damn. Go ahead, make my day.

—Suddenly, the doctor finds himself sitting in a police station. A grim cop is hovering over him.

“OK, Fauci, your story checks out. You were in the hospital the day of the murder. You’re free to go. Get the hell out of here. By the way—one of those little stores your boys collect protection money from? The owner couldn’t pay up. He just committed suicide. Left his wife without a husband and his kids without a father. The DA is looking into it. No doubt he’ll be filing charges against you.”

In a daze, Fauci stumbles to the exit and opens the door. It’s raining outside. He looks down. He’s about to step into a puddle. He scrutinizes it for any signs of fire…

He hears a howl. It sounds like a lone animal baying in the forest.

It’s coming from his own mouth.

People in the street look at him.