Obama and Hillary Clinton have been planning a disarmament of the United States for 16 years.  It is now in full force moving fast with the help of our young people.

The two planned to use two White House terms to destroy the United States, maim the Constitution, cancel the Second Amendment, and open borders to flood the nation with illegal immigrants  – calculated to vote Democrat.

It is alleged that “Deep State” rogue operatives murdered Supreme Court Justice Antonin Scalia in an attempt to lock in a Far Left ideology on the Supreme court by giving President Obama one final  nomination.

The plan included the weaponization of the intelligence community to ensure the Democrats would win the 2016 presidential election.  We can see how the FBI became politically involved in understanding that was part of the plan.

McCabe’s role was to communicate the Lisa Page “insurance” idea to Loretta Lynch, the HRC conspiracy develops as a pyramid structure, with Obama at the top calling the shots needed to use the Fusion GPS Dossier to get FISA court ordered approval to conduct electronic surveillance on Donald Trump and and his team.  Other major players were John Podesta, James Clapper, and most of all John Brennan.

Obama’s CIA Director, John Brennan sat at the top of the pyramid structured to destroy the United States.  He was Obama’s CIA handler and had converted to Islam just as Obama had done. Not only that, Brennan was the creator of the Russian/collusion story.

Brennan’s life was filled with individuals that who were labeled as terrorists. He has spoken positively of Islam and at times, jihad. He has even blamed jihad on “injustices, economics and ignorance,” but never mentioning that it is the result of Islamic teachings.

John Brennan has done more damage to the United States than – in my opinion – any other government officer alive.  In his heart and soul he is Islamic, and he has sought to convert the US to Islam. Islam is the religion of the New World Order.  It is coming upon us now.

As this plan progresses, we are now seeing the movement started with the Parkland High School shooting, rapidly developing.  Obama and Clinton are moving in to take their places front and center. Although, Obama got the plan started during his reign as President.  Remember Obama’s mantra of CHANGE. www.nraila.org/articles/20080728/barack-obamas-10-point-plan-to-change

As we have seen, Obama and Hillary Clinton have not given up power, and they never planned to do that.  When President Trump won the Presidency, they never left Washington. The plan was amended to impeach Trump, and that plan is now in progress.

It has been in the works for 16 long years, and it is all revealed now just as we suspected.

The below is quoted from www.nraila.org/articles/20080728/barack-obamas-10-point-plan-to-change

“Barack Obama … is going to demand that you shed your cynicism. That you put down your division. That you come out of your isolation. That you move out of your comfort zones … Barack will never allow you to go back to your lives as usual …”.

As NRA members, this statement doesn’t bode well for our future. Our “lives as usual” means the daily exercise of our freedom.

And what of “cynicism”? It is the very basis of Americans’ long history of questioning government power and its abuse. It is the basis of challenging dissembling politicians. Cynicism is the key to seeing through politicians like Obama and Hillary Clinton, who falsely wrap themselves in the Second Amendment while espousing dangerous programs for civil disarmament.

And “division”? As NRA members, our “division” from the likes of Obama means we stand together and fight every day against those who would destroy the bedrock principles that have made our country the freest in the world. Divisiveness is the basis of our democratic institutions. Division based on principle is a noble thing.

“Comfort zone”? What about the life, liberty and pursuit of happiness guaranteed by the Declaration of Independence? That is the real “comfort zone” of all Americans. We are the only nation on earth built on the principle of “pursuit of happiness.” That means we do not serve government; it serves us.

The “change” Obama and his close allies—like George Soros’ Moveon.org —seek is a complete regime change driven by a radical political agenda. For the nation’s gun owners, “change” will take the form of many steps back to the bad old days of the Clinton-Gore years or the Jimmy Carter years, when bureaucrats in a dozen agencies were relentless in their schemes to press a hostile presidential agenda against gun ownership.

For gun owners, “change” could well mean an erosion of hard-fought reforms and hard-fought protections we have secured over the years. Those reforms represent battles won by gun owners led by NRA since the founding of the Institute for Legislative Action in 1975.

“Change” means removing the restrictions we secured against the Consumer Product Safety Commission from exercising a bureaucratic ban on firearms or ammunition based on phony “consumer hazard” criteria. This is something the Brady Campaign and the Violence Policy Center have vainly sought for years.”

Now, what are we facing today with the completion of the Obama/Hillary plan of change for the United States?  Where are we at?

First of all, thank God for President Trump – never stop praying for him.  He is our warrior against this long thought-out plan. He is all that stands between the Obama/Hillary plan for the US and us.  Make no mistake about it – this is the truth. 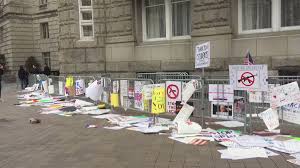 We are presently facing a crisis which has never befallen the United States.  The Left is using our young people to do their dirty work. It is a below-the-belt plan, as it is an evil scheme using innocent children to destroy the liberties Americans have always held dear.

Officials tell @NBCNews that they are estimating 800,000 people gathered in Washington, DC today for the #marchforourlives rally.

Listening to the students from Parkland and across the country today is a reminder of what is possible when our future is in the right hands, and when we match inspiration with determination. https://twitter.com/danmilanohere/status/977608614721609730 …

Michelle and I are so inspired by all the young people who made today’s marches happen. Keep at it. You’re leading us forward. Nothing can stand in the way of millions of voices calling for change.

Marjory Stoneman Douglas High School student Delaney Tarr at #MarchForOurLives rally: “We will continue to fight for our dead friends. There will be no faltering.” http://abcn.ws/2pD5LGJ

Scott Dworkin✔@funder  Check out how big #MarchForOurLives in DC is. Wow. America rules.

Parkland student says ‘March for Our Lives’ is ‘just the beginning’
12 p.m.
Marjory Student Douglas High School student David Hogg said on Saturday that the “March for Our Lives” rally for gun control is only the beginning of the movement and urged people to hold town halls while Congress is in recess over the next two weeks.
“I want people to understand, this is not the end, this is just the beginning,” Hogg told CNN at the “March for Our Lives” rally in Washington D.C. “We’re going to have town halls over the next two weeks when congressmen are in their local districts.”
“What people should do that are watching this right now is start organizing town halls over the next two weeks and invite their elected officials. And if they don’t come, invite their opponent,” Hogg said.
Hogg said he hopes the marches and the planned town halls result in politicians no longer taking money from the NRA.
“I want to see the NRA get out of funding so many corrupt politicians where they put their lobbyists and their special interests first, ahead of their constituents and the lives of children,” Hogg said.

In conclusion, the Obama/Hillary plan has gone forward without interference.  There has been only one roadblock to stand in its way, and that is President Donald Trump.  However, he is only one man, so we must all pray for him and the United States of America.

We must continue to be strong and do our best to preserve the Constitution and the First and Second Amendments.  We have been censored on social media, and now they are planning to disarm us. Not only must we pray, but we must continue to speak and communicate across the Country and Internet.

Never lose faith in our Creator, who endowed us with inalienable rights – That which is inalienable cannot be bought, sold, or transferred from one individual to another. The personal rights to life and liberty guaranteed by the Constitution of the United States are inalienable.

Never forget who is truly in charge.  He will have the last word on judgement day, which is approaching rapidly.

Hallowed Be Thy Name –

TLB published this commentary/report from IWB with our sincere gratitude for making it available.

Related from The Liberty Beacon